There was a vulnerability in the cdnjs library update server that could execute arbitrary commands, and as a result, cdnjs could be completely compromised.
This allows an attacker to tamper 12.7%1 of all websites on the internet once caches are expired.

cdnjs is a JavaScript/CSS library CDN that is owned by Cloudflare, which is used by 12.7% of all websites on the internet as of 15 July 2021.
This is the second most widely used library CDN after 12.8%2 of Google Hosted Libraries, and considering the current usage rate, it will be the most used JavaScript library CDN in the near future. 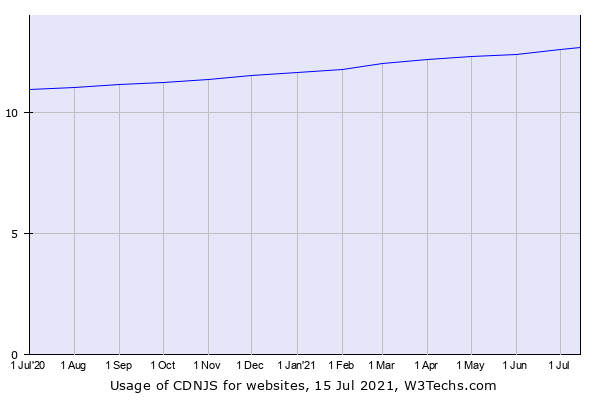 A few weeks before my last investigation into “Remote code execution in Homebrew by compromising the official Cask repository”, I was investigating supply chain attacks.
While finding a service that many software depends on, and is allowing users to perform the vulnerability assessment, I found cdnjs. So I decided to investigate it.

While browsing the cdnjs website, I found the following description.

Couldn’t find the library you’re looking for?
You can make a request to have it added on our GitHub repository.

I found out that the library information is managed on the GitHub repository, so I checked the repositories of the GitHub Organization that is used by cdnjs.

As a result, it was found that the repository is used in the following ways.

As you can see from these repositories, most of the cdnjs infrastructure is centralized in this GitHub Organization.
I was interested in cdnjs/bot-ansible and cdnjs/tools because it automates library updates.
After reading codes of these 2 repositories, it turned out cdnjs/bot-ansible executes autoupdate command of cdnjs/tools in the cdnjs library update server periodically, to check updates of library from cdnjs/packages by downloading npm package / Git repository.

The automatic update function updates the library by downloading the user-managed Git repository / npm package and copying the target file from them.
And npm registry compress libraries into .tgz to make it downloadable.
Since the tool for this automatic update is written in Go, I guessed that it may use Go’s compress/gzip and archive/tar to extract the archive file.
Go’s archive/tar returns the filename contained in the archive without sanitizing3, so if the archive is extracted into the disk based on the filename returned from archive/tar, archives that contain filename like ../../../../../../../tmp/test may overwrite arbitrary files on the system. 4
From the information in cdnjs/bot-ansible, I knew that some scripts were running regularly and the user that runs the autoupdate command had write permission for them, so I focused on overwriting files via path traversal.

To find path traversal, I started reading the main function of the autoupdate command.

As you can see from the code snippet above, if npm is specified as a source of auto-update, it passes package information to the updateNpm function.

Then, updateNpm passes information about the new library version to doUpdateNpm function.

And doUpdateNpm passes the URL of .tgz file into npm.DownloadTar.

As I guessed, compress/gzip and archive/tar were used in Untar function to extract .tgz file.
At first, I thought that it’s sanitizing the path in the removePackageDir function, but when I checked the contents of the function, I noticed that it’s just removing package/ from the path.
From these code snippets, I confirmed that arbitrary code can be executed after performing path traversal from the .tgz file published to npm and overwriting the script that is executed regularly on the server.

Because Cloudflare is running a vulnerability disclosure program on HackerOne, it’s likely that HackerOne’s triage team won’t forward the report to Cloudflare unless it indicates that the vulnerability is actually exploitable.
Therefore, I decided to do a demonstration to show that vulnerability can actually be exploited.

The attack procedure is as follows.

… and after writing the attack procedure into my notepad, for some reason, I started wondering how automatic updates based on the Git repository works.
So, I read codes a bit before demonstrating the vulnerability, and it seemed that the symlinks aren’t considered when copying files from the Git repository.

As Git supports symbolic links by default, it may be possible to read arbitrary files from the cdnjs library update server by adding symlink into the Git repository.

If the regularly executed script file is overwritten to execute arbitrary commands, the automatic update function may be broken, so I decided to check the arbitrary file reading first.
Along with this, the attack procedure was changed as follows.

It was around 20:00 at this point, but what I have to do was creating a symlink, so I decided to eat dinner after creating the symbolic link and publishing it.5

Once I finished the dinner and returning to my PC desk, I was able to confirm that cdnjs has released a version containing symbolic links.

After checking the contents of the file to send the report, I was surprised.
Surprisingly, clearly sensitive information such as GITHUB_REPO_API_KEY and WORKERS_KV_API_TOKEN was displayed.
I couldn’t understand what happened for a moment, and when I checked the command log, I found that I accidentally put a link to /proc/self/environ instead of /proc/self/maps.6
As mentioned earlier, if cdnjs’ GitHub Organization is compromised, it’s possible to compromise most of the cdnjs infrastructure.
I needed to take immediate action, so I sent the report that only contains a link that shows the current situation, and requested them to revoke all credentials.

At this point, I was very confused and hadn’t confirmed it, but in fact, these tokens were invalidated before I sent the report.
It seems that GitHub notified Cloudflare immediately because GITHUB_REPO_API_KEY (API key of GitHub) was included in the repository, and Cloudflare started incident response immediately after the notification.
I felt that they’re a great security team because they invalidated all credentials within minutes after cdnjs processed the specially crafted repository.

After the incident, I investigated what could be impacted.
GITHUB_REPO_API_KEY was an API key for robocdnjs, which belongs to cdnjs organization, and had write permission against each repository.
This means it was possible to tamper arbitrary libraries on the cdnjs or tamper the cdnjs.com itself.

Also, WORKERS_KV_API_TOKEN had permission against KV of Cloudflare Workers that is used in the cdnjs, it could be used to tamper the libraries on the KV cache.
By combining these permissions, the core part of cdnjs, such as the origin data of cdnjs, the KV cache, and even the cdnjs website, could be completely tampered.

In this article, I described the vulnerability that was existed in cdnjs.
While this vulnerability could be exploited without any special skills, it could impact many websites.
Given that there are many vulnerabilities in the supply chain, which are easy to exploit but have a large impact, I feel that it’s very scary.
If you have any questions/comments about this article, please send a message to @ryotkak on Twitter.